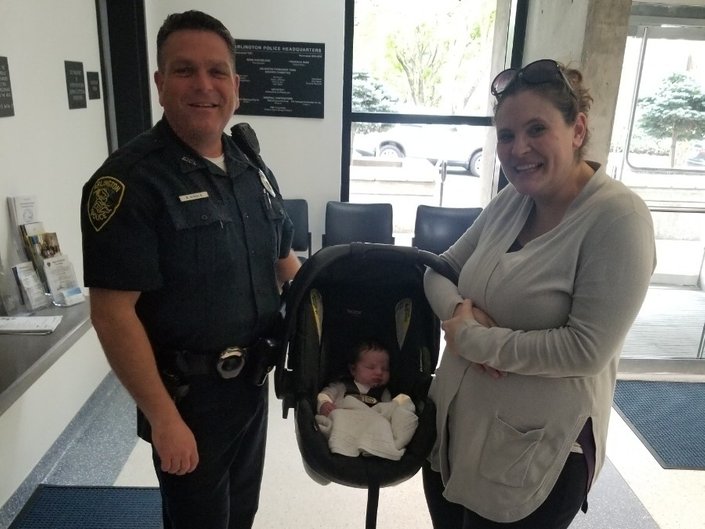 ARLINGTON, MA — An Arlington police officer helped deliver a baby girl when a woman went into labor at home. Just before 5:30 a.m. on May 1, police received a 911 call from Arlington resident Ed McKinnon reporting that his wife was in labor at their College Avenue home.

Officer Brandon Kindle, who was in the area, “acted without hesitation,” police said. He went to the home to find Audra McKinnon giving birth on the kitchen floor and calmly talked her through the delivery.

Maeve McKinnon was born around 5:30 a.m. Emergency crews arrived at the scene and took Audra and her daughter to the hospital. Both were later released and are “doing well,” according to police.

“Officer Kindle did an outstanding job on scene,” Chief Julie Flaherty said in a statement. “It was his professionalism, knowledge, training and quick response that ensured mom was able to safely deliver Maeve and keep both mom and baby safe until paramedics could arrive. He went above and beyond the call of duty and we’re extremely proud of the job he did.”

Audra and Ed McKinnon reunited Maeve with Officer Kindle at the Arlington police station on May 10.

“This was not a planned home delivery, so it was a kind of a scary situation,” Audra McKinnon said in a release. “Officer Kindle was able to remain calm and professional, which was really needed. We’re very thankful he was there with us.”

Kindle was awarded a pink stork pin for his actions.